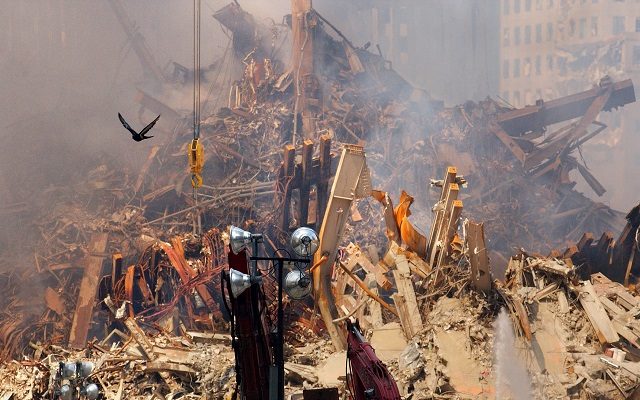 394504 01: A bird flies in front of the wreckage of the World Trade Center collapse September 16, 2001 in New York City. Work continued on the site, even as hopes of finding survivors became more grim. (Photo by Chris Hondros/Getty Images)

While 9/11 is often called the Baby Boomers’ and Millennials’ Pearl Harbor, one historian says the comparison “falls short.”

History Professor Leslie Wilson says people who were around during World War II weren’t hit nearly as hard by Pearl Harbor as future generations were by 9/11.

“Their elders had grown up in an era of wars, and fought to make the world safe for democracy,” Wilson says. “The Boomers and Millennials had grown up in decades where America was not fighting to save democracy, but to expand it.”

As a result, early 2000s Americans believed “they had been living in peaceful times,” Wilson adds. “September 11th, 2001 altered the idea for all generations that we could truly live in peace.”

When I was growing up, Pearl Harbor was America’s worst day since the Civil War. Then came Vietnam.
And now, the need to remember the horror and the heroism of September 11th should be balanced with the need to examine what went right—and wrong—since then https://t.co/9IVxiJOboF