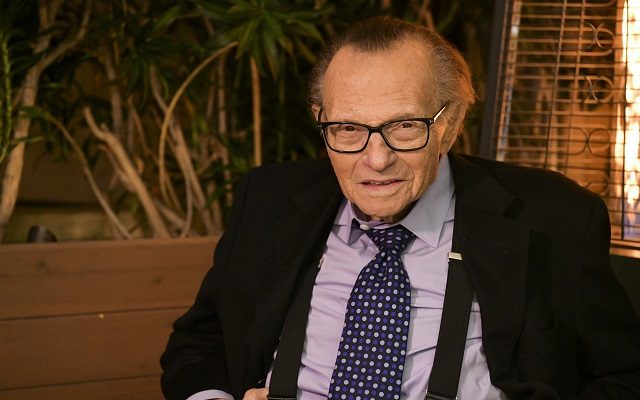 BEVERLY HILLS, CALIFORNIA - NOVEMBER 25: Larry King poses for portrait as the Friars Club and Crescent Hotel honor him for his 86th birthday at Crescent Hotel on November 25, 2019 in Beverly Hills, California. (Photo by Rodin Eckenroth/Getty Images)

Broadcasting icon and legend Larry King has died at the age of 87.  King died at Cedars-Sinai Medical Center in Los Angeles, no cause of death was given at this time.

King was a long time nationally syndicated radio host and a night time host on CNN where he won many awards.

He had many other medical issues in recent decades, including more heart attacks and diagnoses of type 2 diabetes and lung cancer.

Early in 2021, CNN reported that King was hospitalized for more than a week with COVID-19.

For more on the passing of Larry King.  CLICK HERE.

MORE BELOW ON THE PASSING OF LARRY KING FROM ABC NEWS…

Legendary talk show host Larry King, whose career took him from local to syndicated radio to global TV stardom, has died at age 87.

A statement from King’s production company, Ora Media, posted on King’s official Twitter announced his death “with profound sadness,” saying King “passed away this morning at age 87 at Cedars-Sinai Medical Center in Los Angeles.”  A spokesperson for King’s family also confirmed his death to ABC News.

On January 2, King was hospitalized for COVID-19 at Cedars-Sinai Medical Center in Los Angeles, a source close to the King family told ABC News then.