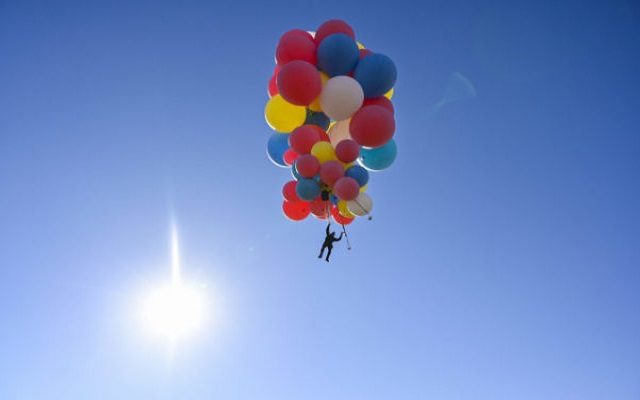 David Blaine is one step away from being the old man in the movie “Up!”  He successfully completed his latest stunt, Ascension, in which he flew over the Arizona desert using helium balloons. The three-hour video opens with David walking hand-in-hand with his 9-year-old daughter, Dessa, telling her this is the first stunt he’s done since she was one. He had stopped doing dangerous stunts because of her. Now, he wanted to do this inspired by her, because it was “beautiful”.

He had originally planned to fly over New York for his first live event but decided to relocate to Arizona because of weather and logistical issues. David Blaine used about 50 helium-filled balloons to complete the stunt. They went through extensive research and testing about possible compression sickness based on how quickly he would rise. Also had to consider if the balloons would pop. They show all that prep.

He began his ascent just before 8 a.m. PT on Wednesday (at about the 2-hour mark in the video) and within 40 minutes had risen to over 19,000 feet, or just over 3.5 miles, where the oxygen level is around half that found at sea level. He eventually reached a height of 24,900 feet and then parachuted to the ground. From lift-off to landing, Blaine completed Ascension within an hour.

“I’m going to provide my point of view through the whole thing,” David Blaine said in a recent interview. The endurance artist did indeed stay in contact with his support team during the stunt, with both visuals and audio streamed on YouTube.