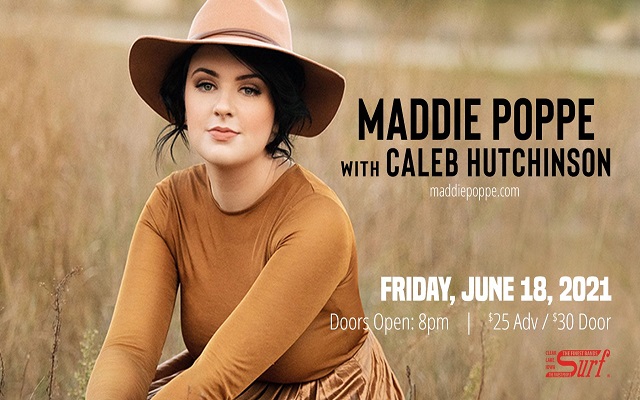 Maddie Poppe is a twenty-three-year-old singer-songwriter from Clarksville, Iowa and Season 16 winner of American Idol. Maddie fell in love with music at a young age, learning to play guitar, ukulele and piano. In 2016, Maddie released her debut album, “Songs from the Basement,” which she wrote, produced and recorded alongside her father, Trent.

After years of performing locally in Iowa, she decided to audition for American Idol – a decision she calls her “saving grace.” Ultimately, Maddie stole America’s hearts and was crowned the winner, giving the audience an emotional, overjoyed, and tear-stained performance of her single, “Going Going Gone.”

Since her Idol victory, Maddie has been in high demand, appearing on multiple TV shows including Jimmy Kimmel Live, Live! With Kelly & Ryan and the Radio Disney Music Awards, and performing at the Hollywood Bowl in Los Angeles, the Special Olympics, and CMA Fest in Nashville.

Maddie’s sophomore album Whirlwind reached #2 on the iTunes Pop charts and her hit single “Made You Miss” earned #19 on the Hot AC Radio charts. Her sentimental ballad “Not Losing You” also swept radio charts, reaching #17.

In Fall 2019, Maddie supported Ingrid Michaelson on The Dramatic Tour, an experience she calls a dream come true. Hoping to brighten the 2020 holiday season, Maddie released a holiday EP aptly titled Christmas From Home on November 20th and embarked on a near-sold out acoustic Christmas tour.

This will be a limited capacity, seated show with tables placed on the dance floor.

Current local and state health department guidelines will be followed.