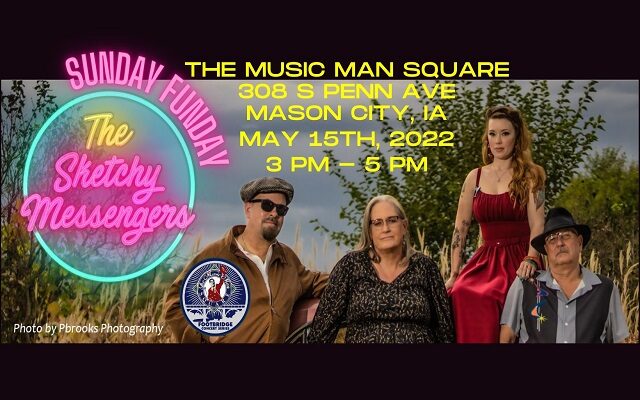 The Mason City Foundation and Music Man Square are proud to present the next installment of The Footbridge Concert Series. The Sketchy Messengers will perform a FREE live concert on Sunday, May 15th, 2022 at 3:00 PM.

This performance will be presented Live with free seating at Music Man Square, broadcast Live Stream via Star 106.1 and Super Hits 102.7, and over the radio on 97.9 FM KCMR (radio broadcast starting at 4 PM). This concert performance is free to the public.

The Sketchy Messengers is a new musical project which has assembled a group of performers with years of musical performance experience. The Sketchy Messengers provide a fresh approach to local musical entertainment, delivering a show with the drive of Rockabilly and the grit and emotion of Blues. The Sketchy Messengers play Rockabilly, Blues, R&B, and Americana with enthusiasm and joy in a way that connects with any audience. They perform both cover and original songs and have a portfolio of music that is always growing. They commit themselves to selecting and performing great tunes with a style that is familiar and yet still fresh.

More about the Messengers:

Jeorgia and Jay were writing and working to develop their musical direction. With a stack of tunes in front of them and a desire to push from the blues into a musical style that was more Americana than anything else, they still felt that there was something lacking. That something turned out to be Mimi when they determined that her goals and theirs lined up quite well. The rockabilly that she longed to sing gave their sound the punch that they felt had been missing in the local live music scene and the old school R&B fit snugly into the blues-tinged Americana they were already playing. With this new direction and purpose, we knew we needed a drummer who could drive these rhythms with finesse. We found our drummer in Josh. Great experience and feel, he keeps us going in the right direction. We now work to give a great show every time out and we are continually working to develop new material to best show off the talents that we have brought together as The Sketchy Messengers.

Mimi Meow has been singing her entire life. (Mason City folks may recognize her from nights out singing karaoke or on-stage at Mason City Community Theater). Since her great aunt and uncle handed her the microphone to a karaoke machine in their garage when she was a child. Mimi has dreamed of being a permanent fixture of a band her whole life, but always knew it needed to be reflective of her style. Then she found Jay, Jeorgia, and Josh, she knew she found the right crowd to help her grow and zero in on her vintage style. Her vocal character involves an abundance of sass, along with soulful notes and vintage impressions. Mimi Meow is the queen of kitsch, class, and curves! Mimi has an extensive background in pinup

modeling and pageantry. She has been published in numerous publications and is an internationally published pinup and promotional model, cover girl, official back up girl for the Victory NSS Series racing team, pinup contest judge and organizer.

As the first pinup ever featured in Nostalgia Drag World Magazine, Mimi became the first woman to ever be on their cover. She holds many pinup titles, including 2014 Miss PBR Blue Ribbon USA and Miss Torque Fest Supreme, where she was selected from all previous pinup champions. As Vice President of the car club, The Katfish Kittens, Mimi frequents events in the car show scene, and volunteers with various charities.

Jeorgia started musical life as the essential geek with thick glasses, a two-octave penny whistle, and access to a neighbor’s piano. Soon she advanced to become the kid with the viola and then on to a strangely comfortable clapboard Kay guitar. Jeorgia was finally at home, parking her brain in the guitar, but never again trusted a clapboard acoustic. In 1978 Jeorgia found an electric guitar purchased at a garage sale for $10.00. An entire new world of blues opened up. For Jeorgia, the blues became a universal language, transcending boundaries of culture, wealth, and status. The blues are a means of connection in a life otherwise disconnected. Jeorgia never put down her guitar. From church praise band to playing stand-up bass in a gospel bluegrass quartet, and even diving into the tonal layering of Pink Floyd, Jeorgia can find the right sound to fit the song. In 2012, Jay reached out and convinced Jeorgia to join him in a blues based cover band and Jeorgia was converted from church player to a bar band player.

Jeorgia’s prior musical projects include Jubilation Bluegrass Quartet, Don’t Worry About It, Souled Out, Storm Brewing, Blue Scratch, and now, The Sketchy Messengers. Jeorgia remains a church player, but the blues remain a mainstay of her musical expression which provides depth and soulfulness to the new rockabilly sound.

Jay Dean provides the bottom for The Sketchy Messengers and over the years, Jay has played a wide variety of musical styles in many different bands, holding down the bottom for classic rock, hard rock, blues, country, jazz, and even some musical theater. This has led him to an appreciation of and a desire to play all types of music. Before The Sketchy Messengers, Jay helped to establish the New Trick band as a local classic rock favorite. He eventually grew to miss the blues and the R&B that he grew up on and chose to join a like-minded group of folks to start the Blue Scratch musical project with Jeorgia Robison as his primary co-conspirator. After a number of years, Jay and Jeorgia were ready to make a change and wanted to shift away from classic rock and work on writing and performing original music.

After convincing themselves that another vocalist would help speed things along, meeting Mimi was the spark they needed to firm up the direction for the new band. Josh Carroll started playing drums as a teenager in Tucson Arizona, cutting his teeth at 7&7 (later Wavelab) studio as a member of Craig Schumacher’s house band Henry Electric. Josh got to play with luminary musicians Rainer Ptachek, Howe Gelb, Joey Burns, and even (for one gig) the Sons of the Pioneers. Moving to Portland, Oregon in the early 90s, Josh continued to play with many of the locals including members of various Pacific

Northwest bands as well as many of the local rock and blues old-timers.

Josh moved to Iowa in 2005 and held the drum chair in numerous bands including Liberty Leg, Edward Gray & Company, Ben Driscoll & the Posthumous Cowboys, The Old Man, the Gary Gibson Trio, and others. His other current project is the Carroll Sims Trio, an improvisational bass and drums project with legendary bassist Lowell Levene-Sims. With Josh joining The Sketchy Messengers to lay down the tasty beats, they knew they had the last piece of the puzzle in place and were onto something special.

Performers covered by The Sketchy Messengers include:

Sharon Jones and the Dap Kings