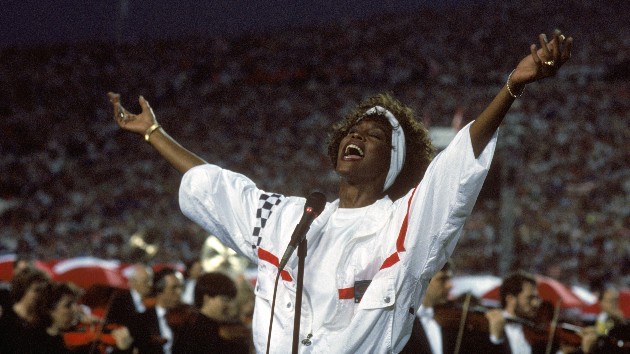 This Sunday, Demi Lovato will take the stage to sing the national anthem at the Super Bowl.  It’s the singer’s second major appearance in a week, following her emotional performance at last weekend’s Grammy Awards, which was itself her first high-profile performance since she was hospitalized in 2018 following an overdose.

With Demi singing the anthem and Shakira andJennifer Lopez doing the halftime show, this will mark the first time that all the main performers at a Super Bowl are Latin women.

While several artists have played the halftime show twice, there are only two artists who’ve ever sung the national anthem at the Super Bowl twice.  One is Billy Joel: He sang it at Super Bowl 41 in 2007, and at Super Bowl 23 back in 1989.  The other is Aaron Neville, in 1990 and in 2006.

The very first chart-certified pop star to sing the anthem at the Super Bowl, though, was Diana Ross, in 1982. Prior to that, the anthem was performed by marching bands, instrumentalists, choirs, country star Charley Pride and middle-of-the-road female singers and actresses, including former Charlie’s Angelstar Cheryl Ladd.  The first male pop singer to do the honors was Barry Manilow in 1984.

The first pop group to sing the anthem was the Backstreet Boys in 2001.  The first country group to do it was the Dixie Chicks in 2003, who were also the first female group to do it.  Since then, no other groups have been tapped for the honor.

Four American Idol stars have done the anthem over the years, starting with Jordin Sparks in 2008. She was followed by Jennifer Hudson in 2009 and Carrie Underwood in 2010.  Kelly Clarkson got the honor in 2012.

Most cite the late Whitney Houston’sperformance of the national anthem in 1991 at Super Bowl 25 as one of the best renditions ever.  It made a big impact, not just because Whitney sang it so well, but also because it took place during the Gulf War.  Her rendition was so popular it was released as a single, was included on her greatest hits album, and was re-released to capture the patriotic spirit after the 9/11 terrorist attacks.

Last year, Gladys Knight sang the anthem, though she was criticized for doing so, given the controversy over the NFL’s alleged treatment of Colin Kaepernick and his decision to kneel during the national anthem in protest of racial injustice.

In a statement to Variety last year, Knight said, “It is unfortunate that our National Anthem has been dragged into this debate when the distinctive senses of the National Anthem and fighting for justice should each stand alone….I am here…to give the Anthem back its voice…and to free it from the same prejudices and struggles I have fought long and hard for all my life.”

For a historical perspective, here’s a list of everyone who’s ever performed or sung the national anthem at the Super Bowl: