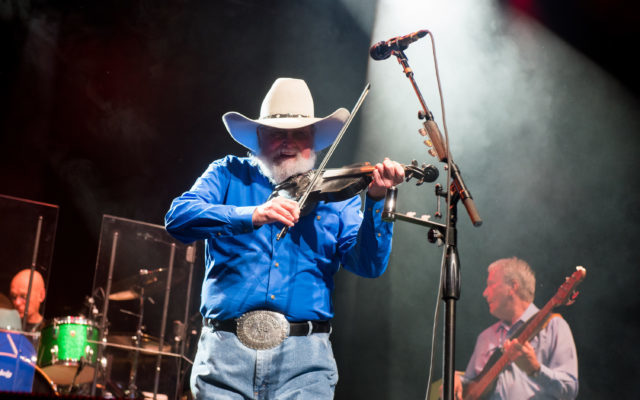 ATLANTA, GA - APRIL 13: Charlie Daniels performs on stage as the opening act on the Alabama The Hits Tour 2018 at The Fox Theatre on April 13, 2018 in Atlanta, Georgia. (Photo by Paul R. Giunta/Getty Images)

Country Music Hall of Famer Charlie Daniels died unexpectedly Monday morning, according to his publicist. The 83-year-old suffered a hemorrhagic stroke, according to doctors at Summit Medical Center in Hermitage, Tennessee.

Born in 1936 in Wilmington, North Carolina, the multi-instrumentalist was best known for his monster crossover hit from 1979, “The Devil Went Down to Georgia.” It made it to number three on the Billboard Hot 100, and won Daniels the Grammy for Best Country Vocal Performance. The next year, it was included in the iconic John Travolta film, Urban Cowboy, with Charlie making an appearance onscreen as well.

The legend found his first success in 1964, writing the song “It Hurts Me,” which was recorded by Elvis Presley, and was soon in demand as a session musician, working on projects by the likes of Bob Dylan and the Marshall Tucker Band.

Charlie released his first solo album in 1971, and by 1973, had taken the track “Uneasy Rider” to number 9 on Billboard’s pop chart. In 1974, Charlie launched the first of what would become his legendary Volunteer Jam, a star-studded tradition that was still set to continue in February of next year.

Charlie’s chart run continued into the eighties, as hits like “In America,” “Drinkin’ My Baby Goodbye,” “Boogie Woogie Fiddle Country Blues,” and “Simple Man,” found a home on the country chart.

Outspoken about his conservative political views, Daniels was also a passionate supporter of America’s military. In 2014, he founded The Journey Home Project, and worked tirelessly to raise money for the nonprofit which helps veterans transition back into life at home.

Two of Charlie’s biggest accolades came later in life. In 2008, he became a member of the Grand Ole Opry, and in 2016, he was inducted into the Country Music Hall of Fame.

Daniels continued to tour and raise money for his charitable causes even into his eighties. He’s survived by his wife, Hazel, and their son, Charlie Daniels, Jr. Funeral arrangements are expected to be announced in the coming days.