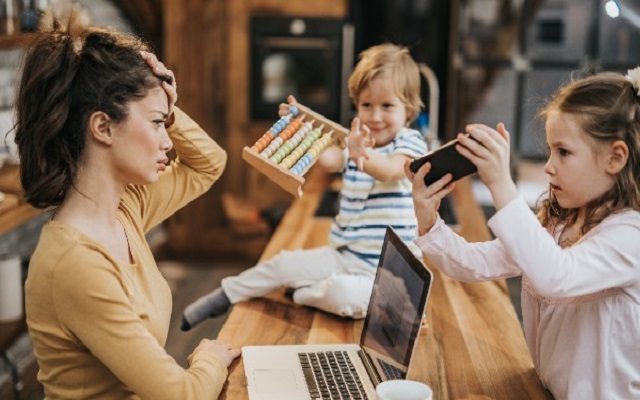 (LONDON) — It’s no secret that parents who have found themselves working from home — in addition to playing teacher, babysitter, and occasional referee to their kids — are stressed over the COVID-19 stay-at-home orders.

However, a new survey shows the average parent can’t get any time to themselves until nearly 9 p.m.

According to an unscientific poll of 2,000 British parents, they used to be able to kick back around dinner time, but nowadays they can’t unwind until 8:39 p.m., on average.

The poll, commissioned by the cleaning product company Plenty, noted that 86% of all parents polled called their COVID-19 life a balancing act, what with trying to keep the house running and prepping meals — all while getting their “regular” work done and making sure their kids are doing theirs.

The poll also revealed that 11:54 a.m. was considered the busiest time of a parent’s locked-down day.  Some 55% of parents noted financial burdens most stressed them out parents, with keeping the house clean the next most-common stressor, at 45%.  Thirty-nine percent of parents suffered from insomnia, while 37% said constantly cleaning up after their kids was also a major cause of anxiety.